The Australian Herpetological Society (AHS) was founded, as the Australian Reptile Club, in 1949 and was the first natural history society in Australia devoted specifically to herpetology. In its early days the Society drew together such names as Roy Mackay, Bill Hosmer, John and Ken Dwyer, Henry Hirschorn, Rusty Holmes, Wal Lorking, Neville Burns, and Kevin Budden (the latter was soon to die from a taipan bite when collecting specimens for an attempt to develop an antivenene). A very young Harold Cogger was a junior member and Eric Worrell was closely associated with many of the early activities. David McPhee also became a member in the early decades.

At the time of the AHS’s formation, the only identification guide for any Australian reptiles was the 1929 “Snakes of Australia” by Kinghorn, long out of print and published knowledge of the ecology and husbandry of Australian reptiles and amphibians was almost non-existent. Within a few years of its formation, with members involved in fieldwork in what were then (and in some cases still are) extremely remote parts of Australia the Society began its first newsletter, The Australian Reptile Club Journal. This was soon followed by a more formal publication, Reptilia, to report members’ observations. Both of these were short lived. However, in 1963 a new publication, Herpetofauna was initiated, the title reflecting the broader range of interests and change in name of the Society. The first issue of the new publication carried a warning from the then Secretary, David Millar, that all members of the Society were expected to contribute one article per year for the fledgling magazine. It took seven years for another issue to come out! However, once Herpetofauna reappeared it has never looked back and is now the major amateur herpetological journal in Australia with a readership of both professionals and amateurs. 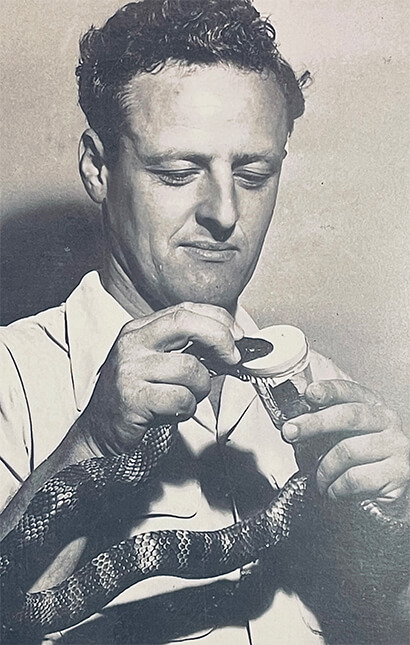 With the broadening of the membership base to other Australian states, a Victorian branch of the AHS was established in 1972, becoming independent in 1976 as the Victorian Herpetological Society. In 1975 the Herpetological Section of the Royal Zoological Society of New South Wales was amalgamated with the AHS and in 1976, the future of Herpetofauna was more firmly established with the formation of the Australasian Affiliation of Herpetological Societies, of which the AHS was founding member. More recently the Frog and Tadpole Study Group of NSW was initiated as a special interest group of the AHS, becoming independent in 1994.

The AHS was closely involved in the formation of the Reptile Keepers Association in 1984, and together with that organisation initiated discussions on reptiles and amphibian licensing with the NSW National Parks and Wildlife Service (NPWS). After a long and often frustrating twelve years of meetings, which had to cope with changes of government, new directors and restructuring of the NPWS, a new licensing system was established in NSW in 1997. This new system has opened up herpetoculture in this state, allowing interested keepers to legally acquire and transfer stock and disseminate information on husbandry and breeding without fear of prosecution.